Editor’s note: Brandborg Vineyard and Winery is temporarily closed for wine tasting and events due to the Corona Virus restrictions by the State of Oregon. However, the winery is still open for bottle sales.

The award-winning winery, one of five wineries in a five-mile radius, has received major accolades for their superb Gewürztraminer. 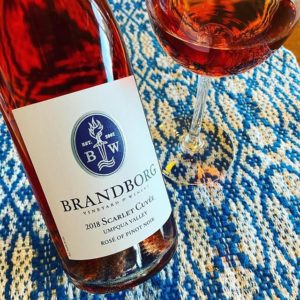 The Umpqua Valley has 3000 planted acres, with pinot noir the most planted variety. The Elkton Oregon AVA (American viticultural area) was officially designated in 2013 as a means to differentiate this area from the much warmer microclimates characteristic of most of southern Oregon.

Terry and Sue Brandborg began their search for a cool, coastal climate terroir that would produce harmonious, distinct wines. Their journey of discovery led them to Elkton, Oregon, in the Umpqua Valley near the Southern Oregon coast. They planted the first 5 acres of pinot noir, only the beginning of an eventual 50 acres of vines.

Caption: A garden of hostas beneath a Burr Oak tree. Photo credit:  Photo courtesy of MelindaMyers.com    by Melinda Myers Celebrate National Arbor Day, the last Friday in April, by planting new trees and caring for established ones in your landscape and community. This special holiday was first celebrated in 1872. Arbor Day celebrations continue […]

Caption:  Aglaonema ‘Siam Red’ (Red Chinese Evergreen) is a popular low light plant that can brighten up any space with its beautiful foliage. Photo credit:  photo courtesy of MelindaMyers.com by Melinda Myers Don’t let a lack of brightly lit windows stop you from gardening indoors.  Include some low maintenance, low light houseplants and maintenance strategies to […]

The Wooden Shoe Tulip Fest is an invitation to enjoy all things that make spring in Oregon and the Northwest, open daily from 9 a.m. to 6 p.m., March 25-May, 2016. Stroll through 40 acres of stunning beauty, experience expansive views of vineyards, distant mountains, and a few mud puddles. Fresh flowers, food, and fun […]

Are you looking for a Seattle Portrait Photographer?

Create your flower work of art