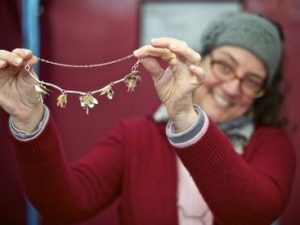 Portland Saturday Market is the largest continually operating outdoor arts and crafts market in the nation. Centered in Portland’s historic Old Town, the market is one of the most popular shopping destinations for local handcrafted goods.

Every Saturday and Sunday from March through Christmas Eve the Old Town/Chinatown neighborhood transforms into a thriving arts and crafts open-air marketplace.

Portland Saturday Market was the brainchild of two women, Sheri Teasdale and Andrea Scharf. Both were artists living in the area who had sold at the Saturday Market in Eugene; their idea was to create a similar style of market in downtown Portland. Beginning in December 1973, the two visited everyone they could think of in the city to sell their idea: an open-air market of all handmade food and craft items.

The new organization was incorporated under Oregon law as a mutual benefit corporation, a special class of institutions that do not make a profit, but exist for the economic benefit of their members, making PSM a non-profit organization that is not tax-exempt. Seeking a location for the market, Bill Naito offered them a location next to his family business in the “Butterfly” parking lot. The large blue butterfly mural fluttered over Portland Saturday Market for many years to come.

The market eventually moved to the site under the Burnside Bridge in 1976, and started staying open on Sundays the following year. The Market was there for 34 years before the redevelopment of Old Town starting up again in 2006 and a permanent home for PSM was constructed in Waterfront Park. The Market officially moved into its new site in May 2009. Things have changed a lot from the early days. PSM has over 350 members and generates an estimated $8 million in gross sales annually. It has become a central economic engine for the historic Old Town/Chinatown neighborhood, and attracts an estimated one million visitors to this area each year.

The waterfront restaurant Hangar on the Wharf in Juneau will soon be home to a new ballroom as well as a newly renovated kitchen. The new ballroom space will be able to accommodate meetings, receptions and large parties with live music or a DJ with its stage area. The restaurant will also offer on-site catering […]

Photographer is passionate about Northwest

Photo caption: Blooming colors illuminate Jake Bestgen’s “Stargazer” image. Photographer Jake Bestgen is passionate about capturing his many Pacific Northwest landscape and floral arrangements. “Until just recently, my work has remained in the archives of my computer,” says Bestgen, a Vancouver, Washington resident. “I recently decided to print and frame some of my photos and […]

Manage mosquitoes for a safer summer

DogPAC: Give others space on trails!

Bring in the Birds with these flowers