Caption: The Hood River Marina offers a protected harbor for boats with access to the Columbia River and is a hub of local recreation and activity.

There’s something magical about seeing, touching and cruising these mighty waters from a boat. It’s not uncommon to see families on 20’ runabouts spending a pleasant sun-drenched summer day touring the Columbia’s tiny yet eclectic towns, be it the fishing village of Skamokawa, the historic boating community of Cathlamet, antique laden Kalama or any of the other little enclaves that dot the lower river.

“People have used the Columbia River as a super highway for hundreds of years. It’s the greatest land mark and trail through the whole Northwest United States. You can travel to several states and Canada on this trail and many have.  I believe it to be one of the most beautiful places there is,” enthuses Mark Hamrick, harbormaster for the Port of Camas-Washougal.

“When people travel the Gorge by boat they can revert back to a time when there were no roads, and the river was the trail. It’s an adventure that cannot be forgotten,” said Hamrick. “Every bend in the river holds a new secret or story. To the Indians, the Columbia River Gorge is a sacred place. If you look closely you can see signs of this at every turn.”

A handy way to explore the Columbia’s hundreds of sandy beaches, scenic bays, wildlife refuges, backwater sloughs and stellar marine parks and marinas is to divide the local river into east and west sections…starting with Hayden Island in Oregon or Marina Park in Washougal as the base ports. Power boats traveling west at 18 knots can reach Astoria in about 4 ½ hours while sailboats require approximately 12 ½ hours traveling at 7.5 knots. 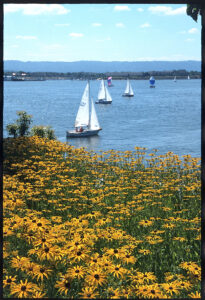 Marina Park offers moorage, BBQ pits, groomed grassy areas and a deck overlooking the marina. “Traveling west on the river approximately 123 miles from the Port of Camas/Washougal opens the door to the world at the Pacific Ocean,” Hamrick observes.

If you are in a hurry, take the main channel downriver from Portland approximately 20 miles to St. Helens. Sights along the way, on Washington side, include the 120-acre Frenchman’s Bar Park, Caterpillar Island with its protected anchorage, and the intimate small rural town of Ridgefield accessible via Lake River. At St. Helens Marina, stop and see turn-of-the century homes in the town’s National Historic District or spend a couple of hours hiking well-groomed trails on nearby Sand Island.

Kalama features a full-service marina within walking distance of the downtown restaurants, grocery stores and antique shops. Further downriver, the sandy beach on the Carrols Channel side of Cottonwood Island is a popular boat camping area. The Rainier City Dock across the river provides a ramp and moorage, with restaurants, grocery stores, gas stations and the six-acre Rainier River Park.

This section of the Columbia offers the most interesting palate of scenic cruising waters. It contains many islands, miles of backwater sloughs, the 35,000-acre Lewis and Clark National Wildlife Refuge…plus the historical riverside communities of Cathlamet, Skamokawa, Westport and Clatskanie.

Clatskanie is accessible via Beaver Slough, off the east end of Wallace Island. This moorage offers bird watching in Clatskanie Marshland, beach combing, and the historic tunnels and ferry to the Washington side at nearby Westport. Traveling boaters can tie-up at Hump’s Restaurant and find groceries and fuel within walking distance.

Located just around the bend from Astoria is a huge bay on the south side of Mott Island at Tongue Point. It has become a favorite anchorage for wildlife lovers.

In Astoria, moor at the West Mooring basin and take advantage of facilities for marine sewage pump out, fuel, and some fine restaurants nearby. Additional moorage is available at the East Mooring Basin, located two miles upstream from the Astoria Bridge. Visiting boaters will find many attractions within easy walking distance, including the maritime museum, the Flavel House, Clatsop County Historical Museum and walking tours of the city’s working waterfront and historical homes.

The dramatic Columbia River Gorge is the centerpiece of this scenic river corridor, where steep, forested slopes and basalt cliffs climb to nearly 4,000 feet, rivaling any river trip in the world. Traveling east, a favorite destination for many Portland boaters is Government Island Dock and Bartlett Landing.

Other popular spots upriver include the Camas-Washougal Marina at Parks Landing, Rooster Rock moorage near Multnomah Falls, and the 848-foot Beacon Rock, located about 34 miles from Portland. For many boaters, the experience of cruising another four miles upriver and through the locks at Bonneville Dam may be a major goal.

By Kevin Kline Blackmouth fishing continues to be fair in the ‘Juan’s. Silver Horde 3” Kingfisher Spoon’s have been hot for us. Make sure and keep those hooks extra sharp, as spoons have a tendency to torque out of a fish’s mouth more than a bait rig or hootchie. I lost a very big fish […]

By Dan Friesen, Guide for Walking Adventures International The following article details a day spent exploring the town of Coeur d’Alene, Idaho. The original route for this walk was put together by a local walking club, the Lilac City Volkssport Association, and you can check out more details on this walk and others on their […]

By Leslee Jaquette     The sun sparkled on the lake as the bells pealed on the hour at Carillon Point Marina on Lake Washington in Kirkland. A singlehander deftly maneuvered Ricochet into the 400-foot guest dock, snugged up the lines and bounded up the promenade stairs.  After Kirkland resident Richard Shea returned with a […]

Managing insects on vegetables and herbs